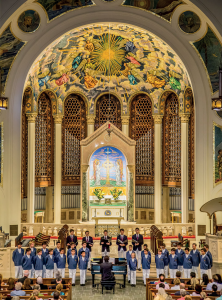 The Swiss Church London is delighted to welcome The Monaco Boys’ Choir (Les Petits Chanteurs de Monaco) for an evening concert on Monday 8  July at 7pm as part of their UK tour.

They are one of Europe’s  renowned Boys’ Choir with an illustrious history and the Swiss Church London is honoured that they should have chosen to perform at The Swiss Church in London.

Entrance will be free. There will be a retiring collection.

The choir’s origins can be traced back to the 18th century. They  have also been associated with some performances of the Monte-Carlo Opera and the Monte-Carlo Philharmonic Orchestra: “La Bohème” and “Tosca” of Puccini, “Der Rosenkavalier” of Strauss, “Orfeo ed Euridice” of Gluck, “Pelléas et Mélisande” of Debussy, “Carmen” of Bizet, “Nut-cracker” of Tchaïkovsky, “Werther” of Massenet”, “La Damnation de Faust” of Berlioz… and they took part to the first ever recording in French of Georges Enesco’s opera “Oedipus”, with the Philharmonic Orchestra of Monte-Carlo conducted by Lawrence Foster, accompanying José Van Dam, Gabriel Bacquier, Nicolai Gedda, Barbara Hendricks, Brigitte Fassbaender for EMI (First Disc Prize). They have also sung in the Principality with Ruggero Raimondi, Katia Ricciarelli, Leo Nucci, Lucia Valentini- Terrani.

In 1997, as part of the closing celebrations ceremonies of the 700 years of the Grimaldi Dynasty, the choir took part to the “Christmas Concert” held in the Vatican and broadcasted in Worldvision, performed together with the Monte-Carlo Philharmonic Orchestra and numerous international artists.