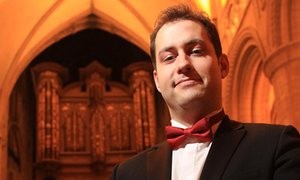 Jonathan Hope is quickly gaining a reputation at home and abroad as one of the most dynamic young organists of his generation. Educated at George Abbot School in his hometown of Guildford, he studied initially with Stephen Lacey, John Belcher and David Sanger, and then at the Royal College of Music, London with Margaret Phillips and Sophie-Véronique Cauchefer-Choplin.

Increasingly in demand as a recitalist, Jonathan’s career to date has taken him throughout the UK, as well as France, Germany, Italy, the USA and Australia. He has performed solo recitals at Canterbury Cathedral, Westminster Cathedral, St. Paul’s Cathedral, Westminster Abbey and Saint-Sulpice, Paris. Recitals abroad in the 2016/2017 season are in Sweden and Rome.