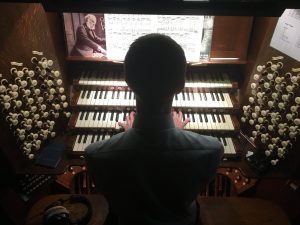 Peter Stevens is Assistant Master of Music at Westminster Cathedral. Born in Lancashire in 1987, he was educated at Chetham’s School of Music, subsequently holding organ scholarships at Manchester Cathedral, St George’s Chapel, Windsor Castle, and King’s College, Cambridge. He came to Westminster Cathedral in 2010, taking up his present position the following year. As well as accompanying the Cathedral Choir in their daily services, recordings and concerts, he has given solo recitals across the UK and Europe. In 2013 he became Director of the Schola Cantorum of the Edington Festival, following three years as Festival Organist. His teachers have included Thomas Trotter, David Briggs, and Colin Walsh.